I want simple, reliable, and fast, I want Thunderbolt™!

Written by Jason Ziller and published on LinkedIN September 30th, 2022.

I recently reposted a video, Intel shows off Thunderbolt 80 Gbps, that was taken during the #IntelTechTour, from Dr. Ian Cutress, which got me thinking about my journey with Thunderbolt. In 2010, Thunderbolt combined high-speed data and video onto a single connector with a total bandwidth of 10Gb/s and we thought that was blazing fast. We heard from some customers that 10Gb/s was not necessary and who would use it? With video and data increasing and everyone becoming a creator, we now know that was not fast enough. A dozen years later, and we are now at 40Gb/s.

We wanted to make the technology widely available, and grow a broader ecosystem to give customers more options with their PCs, more monitors, more storage, faster transfers of data and video, etc. So we did two big things in 2019 - we donated the Thunderbolt™ 3 protocol to the USB Group, and we integrated Thunderbolt into Intel CPUs.

Looking at the image below, we have come a long way to making Thunderbolt broadly available. Thunderbolt is now on leading PC operating systems including Windows, MacOS, Linux and Chrome; Thunderbolt is integrated into three generations of Intel CPUs, and required for all Intel(r) Evo™ and Intel(r) Evo™ vPro(r) Core-based laptops; Thunderbolt’s growth continues to be strong not only on PCs but on accessories, giving customers a full end-to-end experience with only one universal cable. 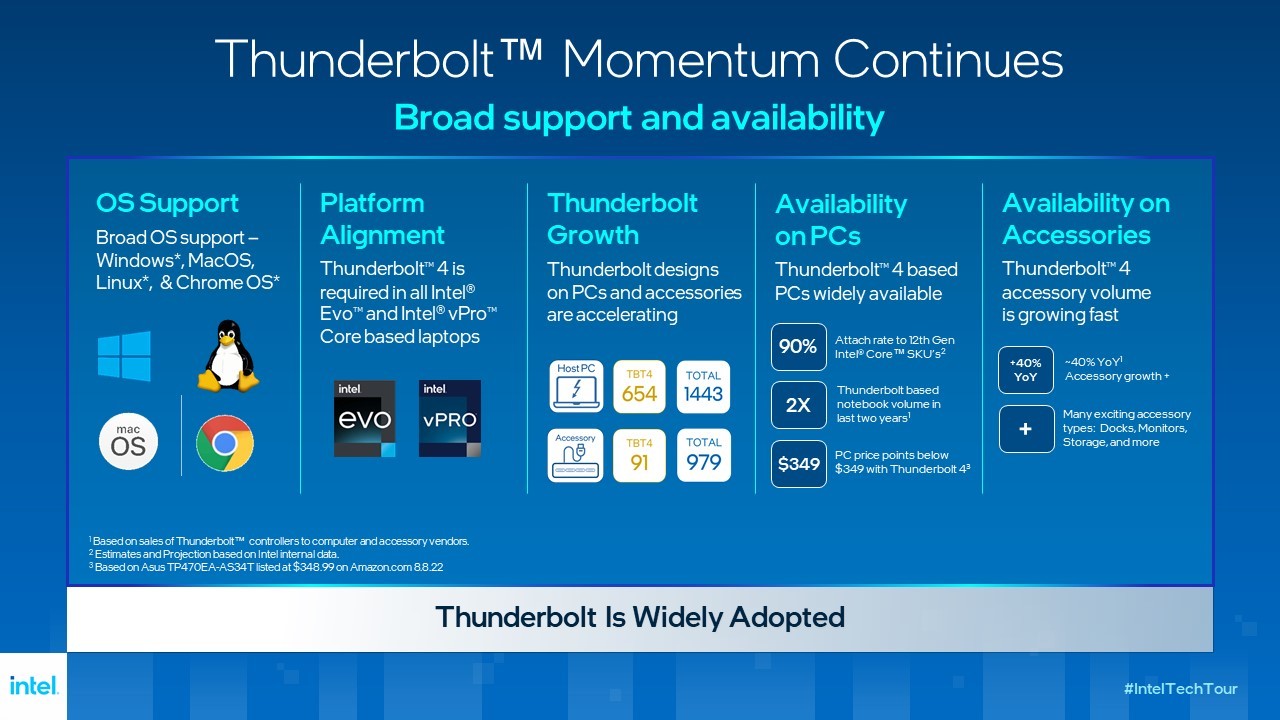 Thunderbolt in the future

There is still a lot of innovation and work going on with Thunderbolt and I can’t wait to share with you why the continued simplicity, reliability, and performance of Thunderbolt matters as we continue to integrate technology into our work, play, and learning environments.